The Municipal Opera House, erected in 1897 and recalling the Paris Opera House.

Saigon is essentially a French city. When the French arrived in the 1860s, they wasted no time in making it the Paris of the East, replacing the existing Vietnamese citadel with some of the most impressive, most French, imperial monuments east of Suez.

As with their contemporaries, the British and the Dutch, the intent of French colonialism was trade, commerce and access to raw materials. Unlike them, however, the French also had one other important goal: the export of La Civilisation Française.

This focus on “Civilisation” manifests itself in the presence of marvellously ostentatious (and somewhat out-of-place) opera houses that exist in almost all of France’s colonies abroad – certainly in the major cities of L’Indochine Française: Saigon, Hanoi and Phnom Penh. These opera houses took centrestage in the cities’ urban landscape, and were also the centre of the colonial social scene.

In Saigon, the Municipal Opera House sits on the famed Rue Catinat (the Champs-Elysees of Saigon).  Erected in a Beaux-Arts style in 1897, it still stands today, and as the two photos (above and below, THEN and NOW) demonstrate, very little has changed in terms of the view, even if the context has changed.

A closer look also reveals the country’s French past continuing to linger in the habits of the newly affluent Saigonese – or Ho Chi Minh-ites. As they smoke, converse and drink petites tasses de cafés et de thés in the cosy cafés that line many of the city’s sidewalks, they recall the joie de vivre et de conversation of their former rulers.

Similarly, the sight and smell of newly-baked banh mi, or baguettes, stuffed with a variety of hams, meats, cheeses and salads; the delectable confit de canard, boeuf bourguignon or even escargots that can be had in the excellent, French restaurants resuscitated in the city, is a reminder that the city’s French past refuses to go away.

All in all – Saigon is alive and well in today’s Ho Chi Minh City! 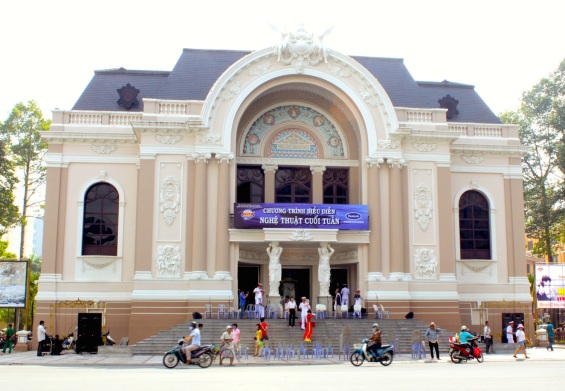 Locals enjoying crepes and coffee at a popular café, housed in a lovely French colonial villa.