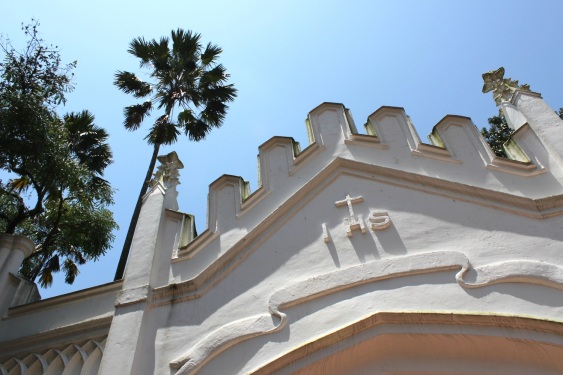 Gates to the Old Christian Cemetery on Fort Canning Hill.

✑ A stroll around the Singapore River, the Civic District and Fort Canning Hill, taking in the sights of Colonial Singapore. This tiny area has Singapore’s greatest concentration of museums, monuments and historical sites, all immaculately preserved. There’s so much that is historical here, it’s mindboggling.

✑ Visit Singapore’s historic districts – Bras Basah, Chinatown, Kampong Gelam/Arab Street and Little India. In particular, pay attention to the “streets of harmony” – streets on which multiple places of worship stand side-by-side in harmony – of which there are three: Waterloo and Queen Streets in Bras Basah, and Telok Ayer Street and North Bridge Road in Chinatown.

✑ The Singapore Botanic Gardens, to catch glimpses of the colonial. The park is one of the oldest in the region, and hasn’t changed much since the British left. It was inscribed as a UNESCO World Heritage Site in 2015.

✑ A stroll down Orchard Road, once a landscape of orchards and colonial villas, but today the region’s most upscale shopping street. Take a short detour up Emerald Hill for the beautiful Peranakan Chinese mansions.

✑ Have a Singapore Sling at the Long Bar of the Raffles Hotel. The atmosphere is raucous, cosmopolitan and touristy; very much the Grand Tour at its very essence.

Singapore is the best place in the region to get an authentic taste of the colonial life; to experience the splendour of a world lost everywhere else in the world but here. 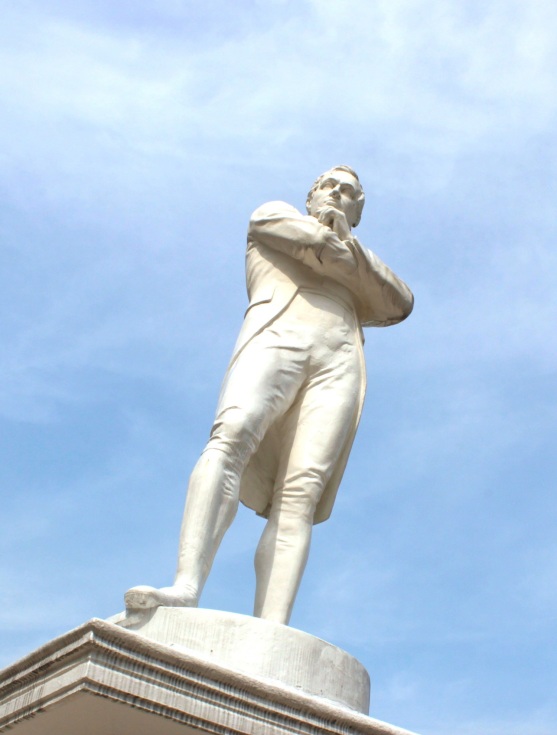 Statue of Sir Thomas Stamford Raffles, at his purported landing site, along the Singapore River. 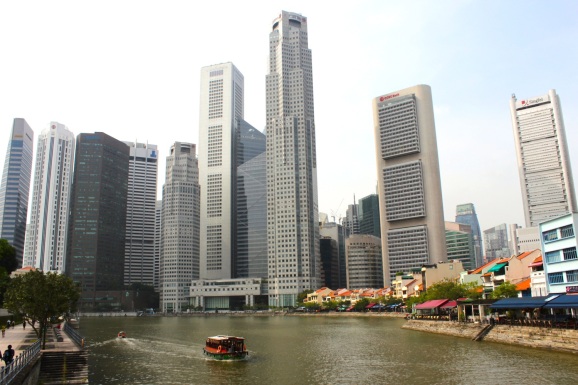 Boat Quay, along the Singapore River, today. Note the row of colonial-era godowns. 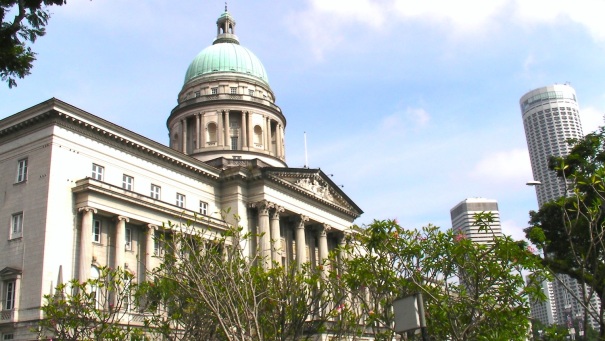 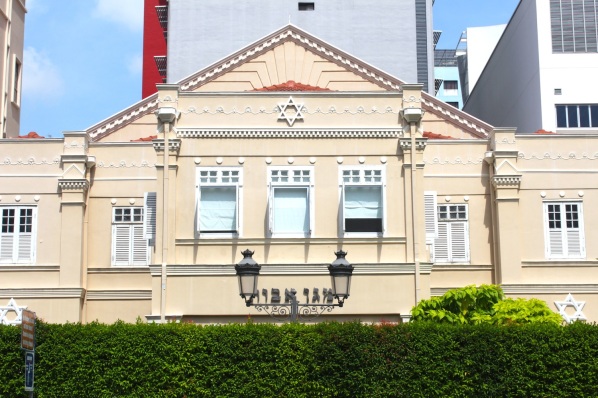 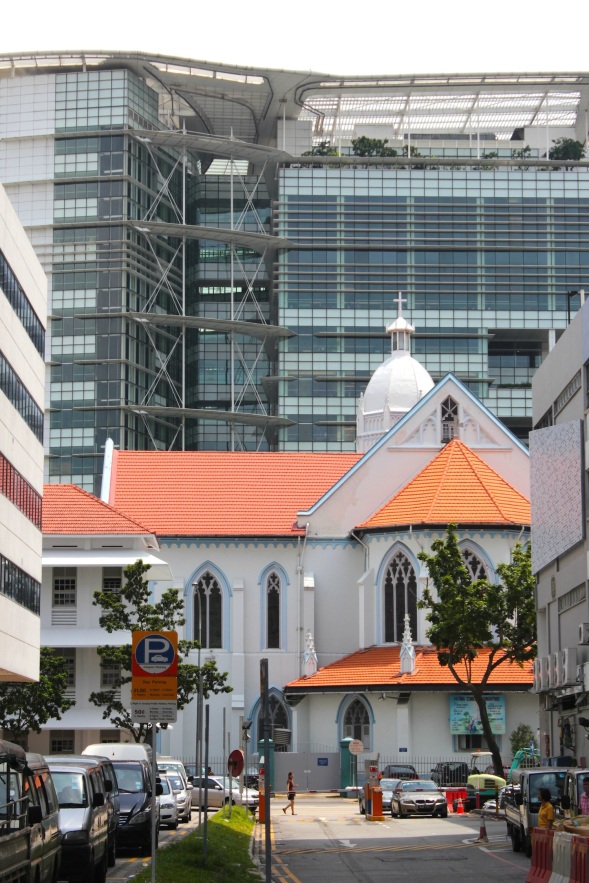 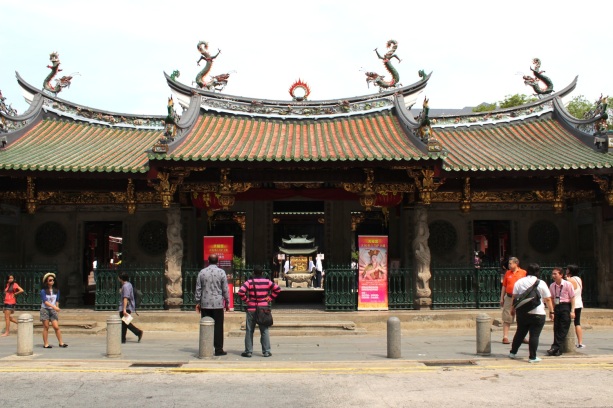 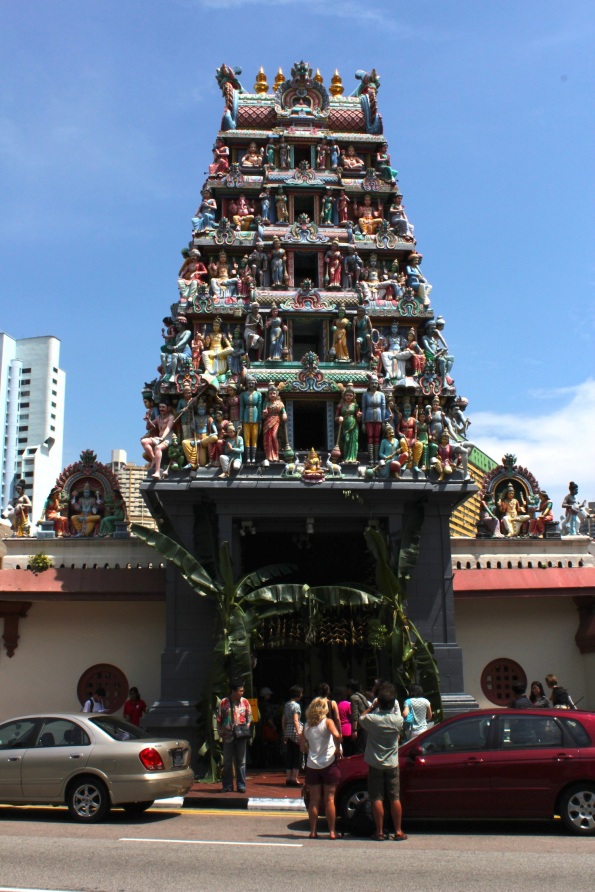 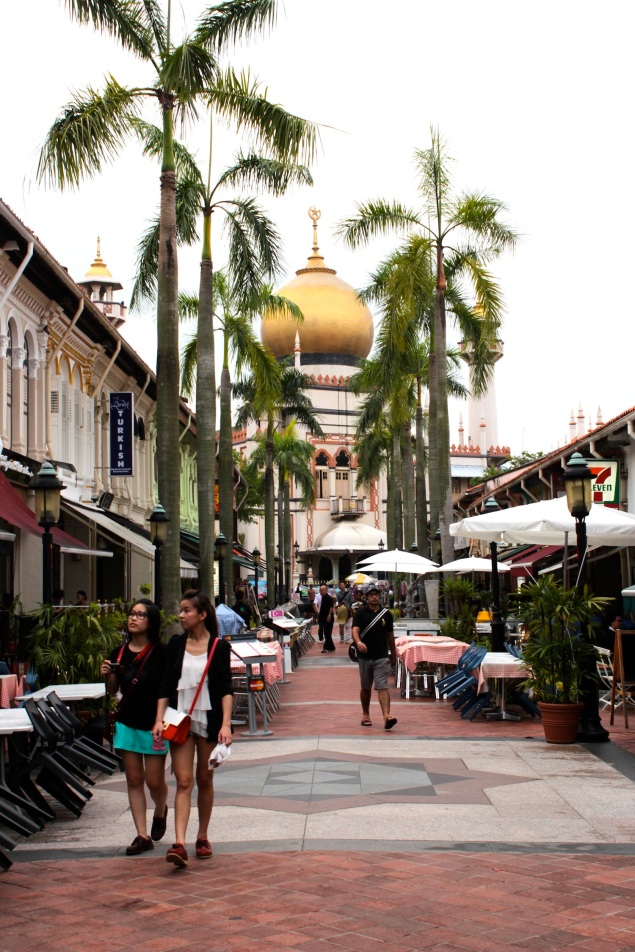 Sultan Mosque, in the Royal Compound of Kampong Gelam. 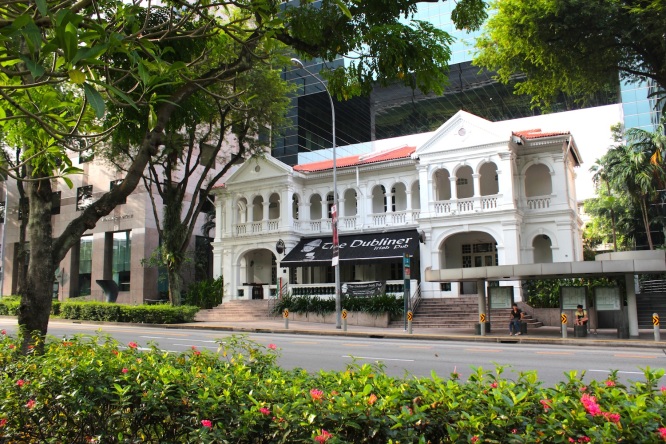 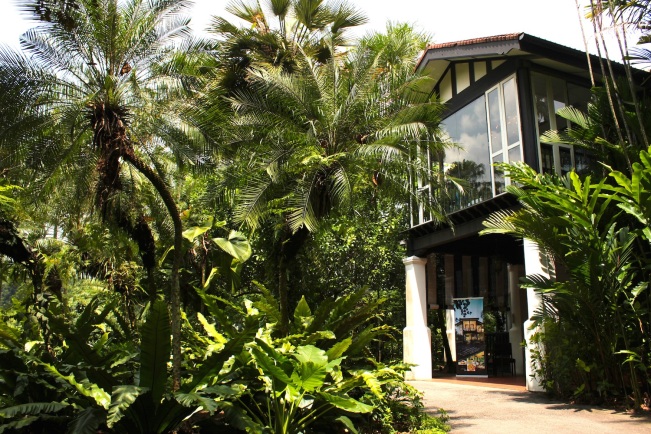 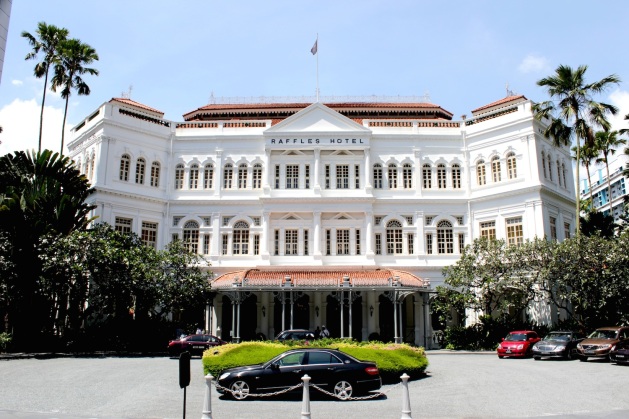 And finally… the grande dame herself: Raffles Hotel. 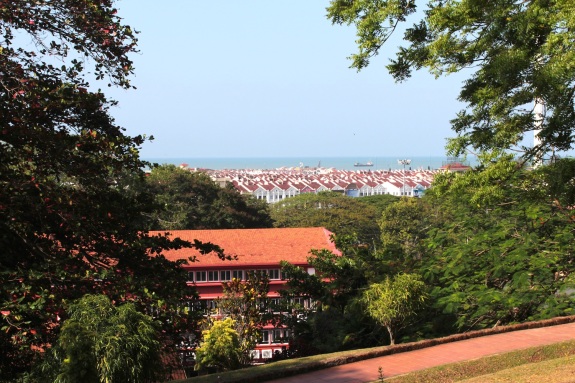 View from St Paul’s Hill of Malacca town and the Straits of Malacca.

The next destination on the Grand Tour is Malacca, the oldest city on this itinerary.  The five essential sights are:

✑ The core UNESCO World Heritage site of St Paul’s Hill, including the La Porta de Santiago, the Christchurch, St Paul’s Church, the Stadthuys, the old Malacca Club and other monuments from the Portuguese, Dutch and British eras.

✑ The Portuguese Settlement in Ujong Pasir, for excellent Portugeuse-Creole (Eurasian) seafood and a gorgeous view of the sun setting over the Malacca Straits.

✑ A random wander down Jonker Street (Jln Hang Jebat) and Heeren Street (Jln Tun Tan Cheng Lock), including a visit to the Baba and Nonya Museum. Have lunch at Cheung Wah 中華, famous for their traditional chicken rice balls.

✑ An early morning stroll amidst the thousands of Chinese graves in Bukit Cina. It’s a gorgeous, haunting, contemplative, lonely, otherworldly experience. Stop in at the Sam Po Kong Temple to pay your respects to Admiral Cheng Ho.

✑ A walk along the Malacca River from the mouth of the river to Kampung Morten. Along the way, stop to take in the iconic postcard view of Malacca from the Chan Boon Cheng Bridge.

Despite Malacca being a UNESCO World Heritage site, there is a significant amount of construction going on within and at the edges of the core and buffer zones. The architectural integrity of the old town has been compromised by gigantic shopping malls and high-rise hotel complexes, more of which are, unfortunately, to come. 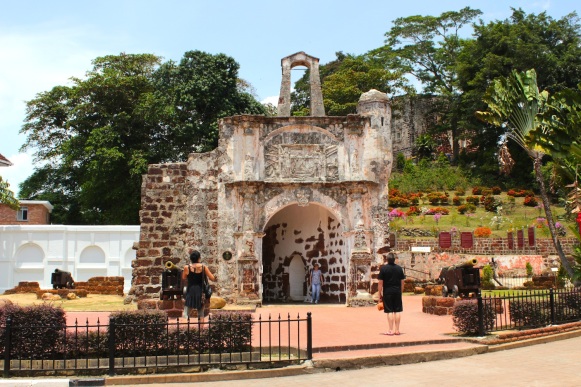 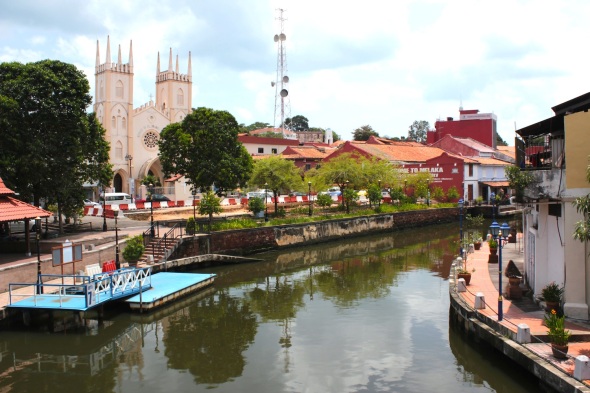 The Malacca River viewed from the Chan Boon Cheng Bridge, with St Francis Church to the left. 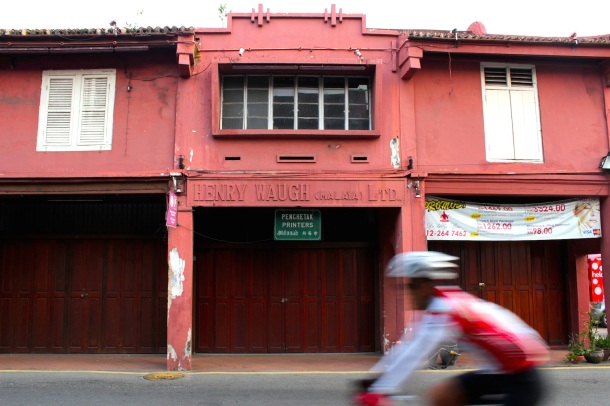 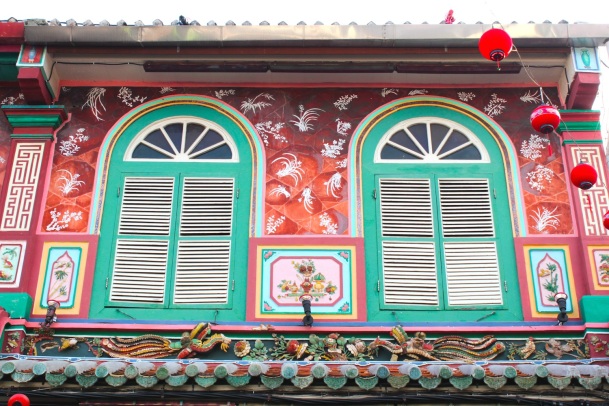 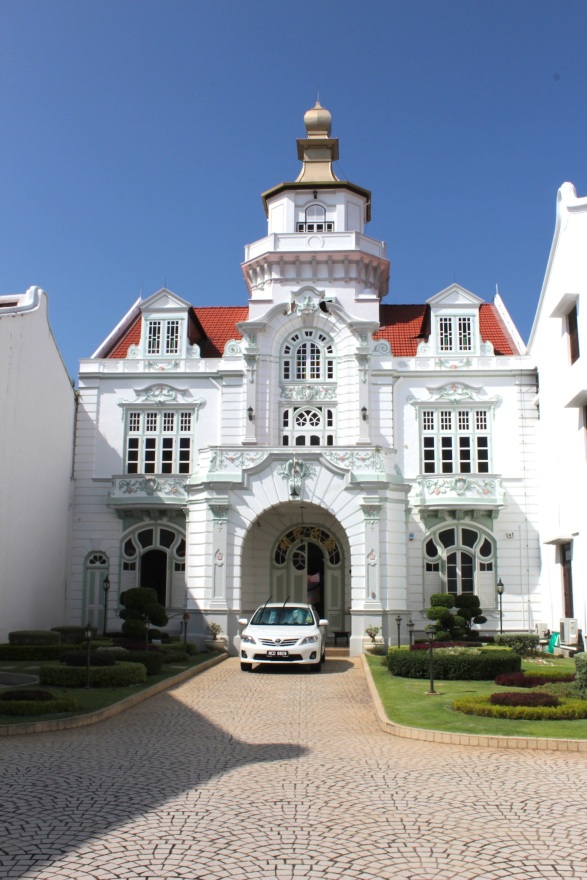 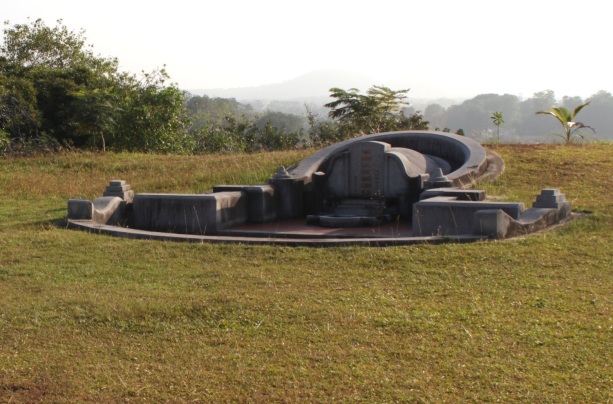 Grave at the top of Bukit Cina. 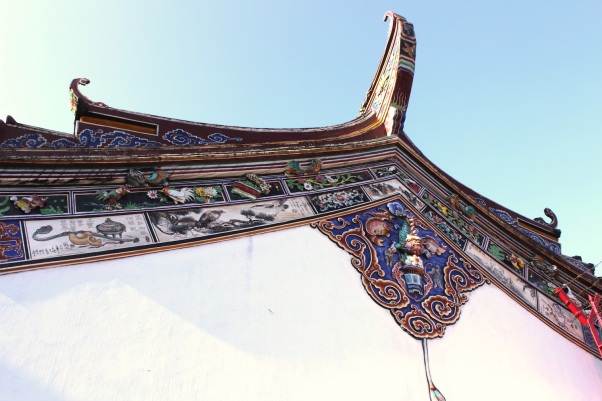 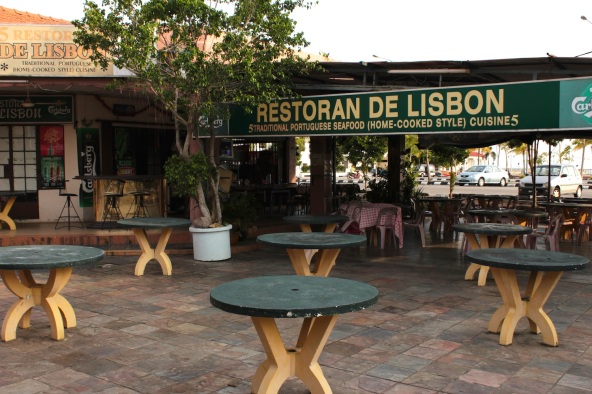 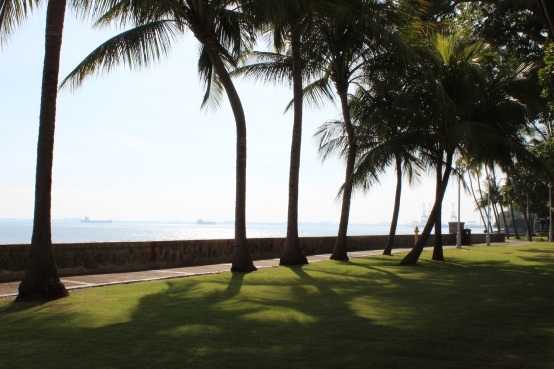 View of the Malacca Straits from the Grounds of the E & O Hotel in Penang.

George Town, Penang is a UNESCO World Heritage site, due to its being an exemplary multi-cultural trading town with many layers of history. In particular, emphasis was placed on it being a showcase of living heritage, embodied not just in the continued use of many heritage buildings, but also in the observance of a variety of traditional customs practiced by the various ethnicities that share the city. Here are 5 essential sights in this city of heritage:

✑ A walk down Jalan Masjid Kapitan Keling – Penang’s “Street of Harmony” – and a visit to the stunning Khoo Kongsi Temple Complex.

✑ A leisurely saunter down Armenian Street for the beautifully restored colonial-era shophouses and the graffiti/public art.

✑ A sprightly jaunt around the Padang to the northern edge of Beach Street, for the air of colonial authenticity, and for the monumental civic and commercial architecture. Look out for Town Hall and City Hall, and the Standard Chartered Bank Building.

✑ The Pinang Peranakan Mansion, for the gloriously over-the-top interiors and the stories of matriarchs and their rebellious progeny. The Cheong Fatt Sze, or Blue Mansion, is equally stunning on the outside but far less well furnished inside.

✑ The Clan Jetties, particularly the Chew Clan Jetty, for its sheer size and for the gorgeous view at the end of the “boardwalk.”

Food is so good in Penang that even Singaporeans down South acknowledge this readily. Brave the many outdoor hawker centres for the most authentic culinary experience and the widest range of local dishes (such as Penang Char Kway Teow, Penang Laksa, Roti Canai, Indian rojak, and so on.)

And of course, stay at the magnificent Eastern & Oriental Hotel (the E & O to locals) for the stunning view of the Malacca Straits from the longest seafront promenade anywhere in the city. 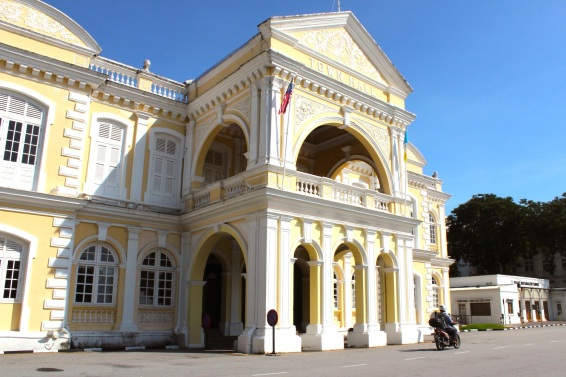 Town Hall, at the Padang. 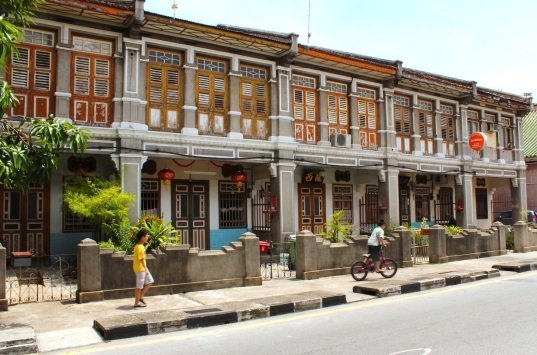 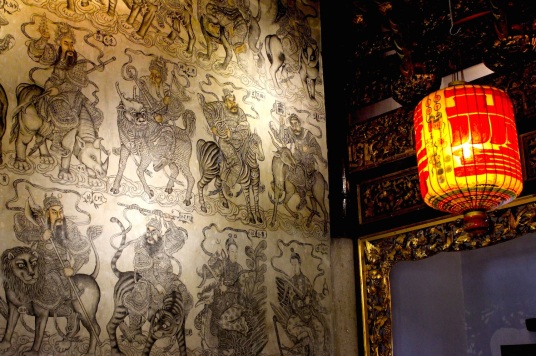 Interior of the Khoo Kongsi Temple. 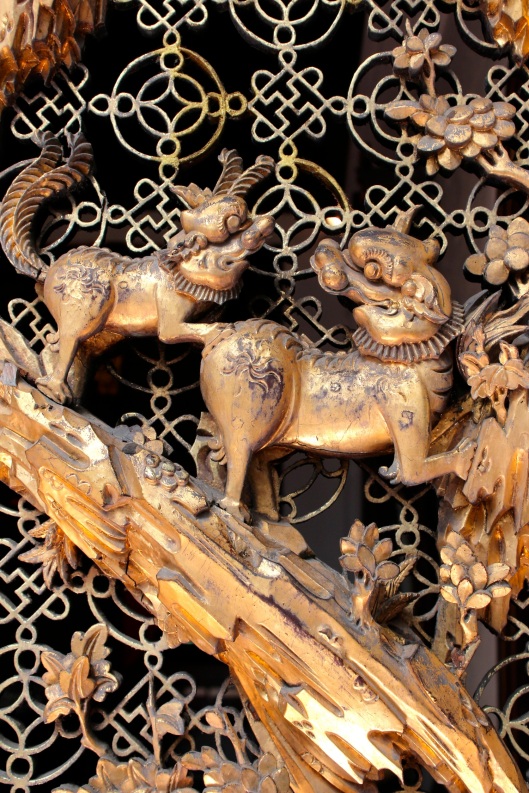 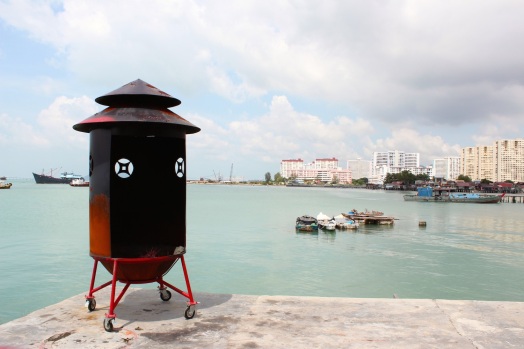 The edge of the Chew Clan Jetty. 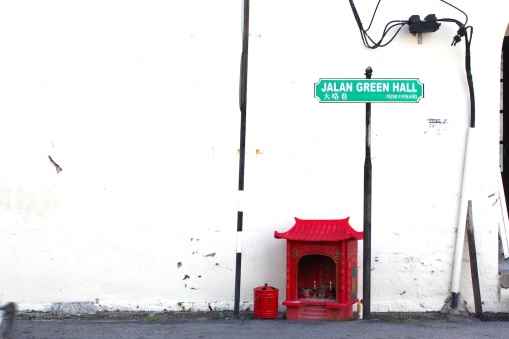 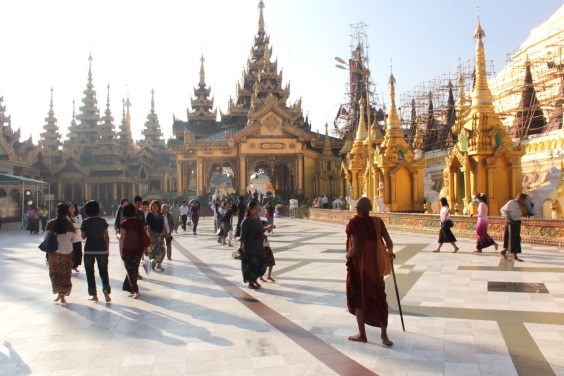 Over the course of the next 12 weeks, I’ll be doing a series of posts featuring 5 Essential Sights for the Grand Tourist’s Itinerary in each of the cities covered in the Grand Tour. I begin, this week, with the city of Rangoon – today’s Yangon.

✑ Stroll along Strand Road and Pansoedan Road, for a glimpse of the greatness of the British Raj. Stand and gape at the monumental civic, cultural and commercial colonial-era buildings that still stand, in particular, the Edwardian-era High Court Building, and the Accountant-General’s Office.

✑ Explore the languid, laidback tree-lined sidewalks of the suburb of Ahlone, a prestigious district of colonial villas, now housing foreign Missions and Embassies. Pop into the Governors House boutique hotel for a drink at the bar.

✑ Take the wonderfully rickety three-hour journey on the Circular Train to the rural outskirts of Yangon and back. Worth the $1 ticket price just to see the motley crew of locals en route. Be prepared to be crushed in your seat by heaving crowds though. Bring your passport.

✑ Pay a visit to the surreal and breathtaking apparition that is Shwedagon Pagoda. Enough said.

Yangon is breathtaking in its vibrancy and timelessness. Visit it before sweeping political and economic change forces the city to slough its magnificent older skin. 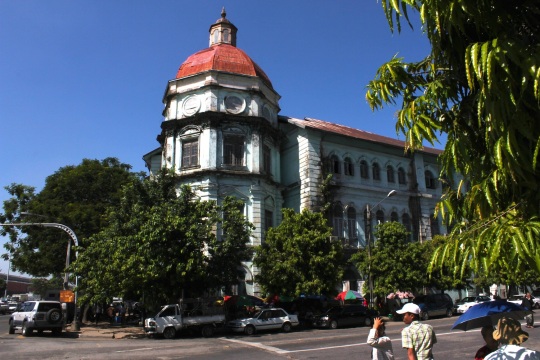 The Accountant General’s Office, at the junction of Strand and Pansoedan Roads.

Interior of the Yangon Circular Train, during a rare moment of silence.

[The Romance of the Grand Tour – 100 Years of Travel in Southeast Asia is available now at all major bookstores in Singapore, Southeast Asia, Hong Kong and Waterstones in London. Find it also on http://www.amazon.co.uk and http://www.bookdepository.com]